What to do when the wind changes

The current subsidies for offshore wind allow companies to set their own agenda, baking in more time to intervene and manage uncertainty. But that’s about to change.

Following the UK government’s announcement that offshore wind projects must use UK manufacturers to keep their subsidies, industry leaders warned of significant investment risk. Should they be worried?

Offshore wind developments on the UK’s continental shelf (UKCS) are megaprojects that take years and cost £billions. Yet, if we believe the websites of the companies and partnerships involved, these complex projects are being delivered on time and on budget. If this industry has managed to attain a level of project success that eludes almost all others undertaking megaprojects, why has a new statutory obligation to use UK suppliers rattled their chains?

Calm before the storm

Strategy is often framed in terms of how you win. But what does that mean? On large complex feats of engineering, you’re really competing against the clock—and against uncertainty. If this is the case, the odds are currently stacked in favour of the offshore wind developers. Why? Well, as Louis Armstrong famously sang, ‘We have all the time in the world.’

In the holy trinity of cost-time-quality, we all know that if one element is the overriding driver, the other two may have to be sacrificed. The subsidies for offshore wind farms allow a fixed return for 15 years based on the capital investment cost of the project. In other words, the subsidies make cost (maintaining a project’s budget) the overriding driver. Delivery schedules are therefore designed to allow enough time to intervene and deal with anything that may crop up that hasn’t been identified previously as a risk.

Nasty unforeseen surprises bedevil any major project. And they have a greater impact when those undertaking them don’t have enough time to intervene and resolve issues. How tightly coupled a project is greatly affects its complexity or challenge level. One of the best ways to reduce overall complexity is to loosen this coupling by giving your project team ample time to complete the job. Today, the subsidies effectively remove the time pressures on the developers to deliver their electrons to users. In a competitive and fluctuating commodity market, it would be a different story.

Our readiness chart below illustrates this difference using real project data from a UKCS offshore wind project. The lower dotted line crossing the vertical axis was taken from the actual data submitted to our assessment tool. But if we tweak the variables related to time pressure, it becomes much more tightly coupled and the challenge level shoots up (see the higher dotted line). 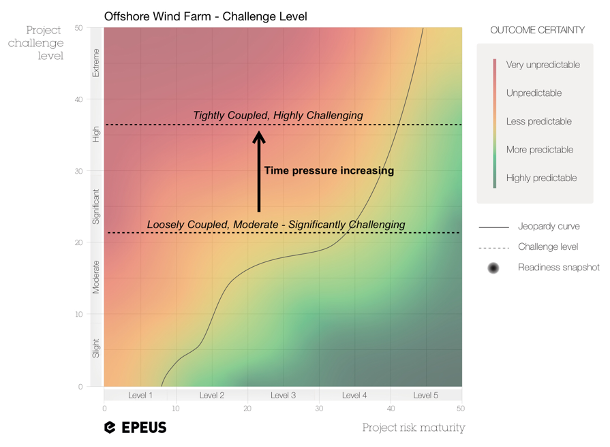 This is where it gets interesting. The horizontal axis shows the level of Project Risk Maturity (PRIMA) needed to get over the ‘jeopardy curve’. For a ‘significant’ challenge, the organization would need to attain a PRIMA Level 4. But, when the challenge jumps to ‘high’, the project needs to be operating at PRIMA Level 5.

The current time generosity, combined with knowing that the project cost per unit is hedged against future price fluctuations has, thus far, provided a win-win for the developers. The risk of project value erosion is low, while reputations stand to gain a boost from the ‘green bounce’ of supplying fossil-free power.

In light of the UK government’s increasing protectionist bluster, it doesn’t take much to see why developers are changing their tune about project risks. Over the next ten years, the UK is looking to increase its offshore wind capacity fourfold. Given that it takes seven or eight years to get largescale offshore windfarms fully producing, the stakes in the renewable power market rise considerably if developers are to meet UK Gov’s expectations. Time is suddenly a key factor and the risk profile of these projects changes dramatically.

Not only do developers now have prescriptive regulatory demands about which firms they should use. They also need to scale up the capacity of what will be a relatively new supply chain. According to the developers currently involved in this sector, they have successful delivery track records. They’ve been there, learned hard-won lessons and got the T-shirt. All of which appears to be true. However, an army is only prepared to fight the war it has just fought. When it comes to large complex projects, increased time pressure to deliver is a formidable enemy.

We don’t have to look far to understand what happens to offshore development project delivery when you add the effect of time pressures, driven by a fluctuating commodity price in a market with no subsidies. That, of course, describes the UK offshore oil and gas industry. When it comes to large complex feats of engineering, this is an industry that prints the T-shirts. It’s been around a long time, has a mature and readily accessible supply chain and offshore field development expertise galore.

Similar to large offshore wind developments, oil and gas projects take years and can cost £billions. Such are the regulatory obligations placed on a prospect’s licence holder, in 2017 the UK Oil and Gas Authority (OGA) commissioned a study into whether or not the outcome of these development projects met the developers forecasts and the OGA’s expectations when the development projects where finally approved to proceed.

As the chart from the OGA report below shows, once budgets exceed £500 million, the certainty of successfully delivering a field development project falls off a cliff. The OGA cites myriad reasons for this. Undoubtedly, though, complexity and uncertainty have both increased on these much larger projects. The associated impacts to these projects are compounded by the need to deliver in a market where demand and unit commodity price fluctuate. 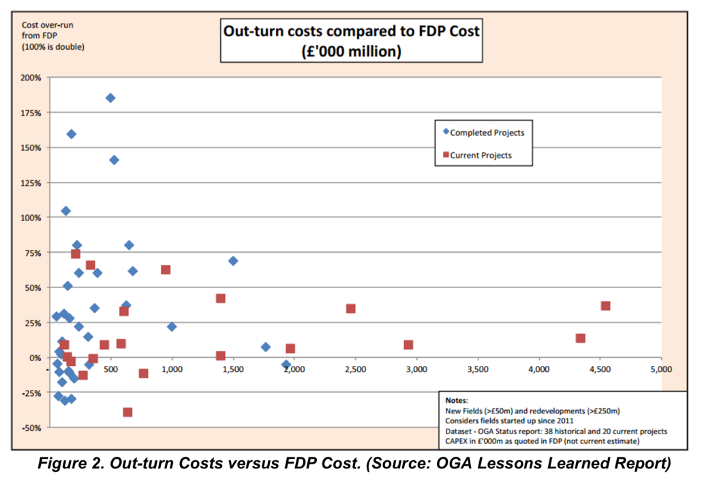 This graphically illustrates what a delivery landscape looks like when the project developers are tight for time due to the need to deliver into a commodities market that’s both cyclical and and volatile. All but one of the completed projects over £500m overran. And all but two of the current megaprojects were overrunning at the time of the report.

There is one element that remains in the offshore wind sector’s favour. Once the phase is reached where turbine platforms are rolled out, installations essentially become clones which acts to reduce complexity. Oil and gas field developments have certain similarities but don’t enjoy the same aspect of repeatability.

What value to place on existing relationships?

The prescription to use a solely UK manufacturing supply chain undoubtedly adds complexity to the offshore wind developments. Over the years, trust will have developed between those owning the projects and their chosen suppliers. This will have to be built with new suppliers, who will also be facing their own scaling challenges. Not to mention capacity constraints from all the new interest.

UK manufacturers currently account for 30% of the supply chain mix. As time progresses, we can also expect time pressure to increase further, driven by governmental net-zero targets and other aspirations that may further change regulations. The wind has certainly changed direction and the new path is riskier.

The decision will disrupt the working relationships between the developers and their current international manufacturers. It will introduce unfamiliarity with requirements. And changes to the type and number of management interfaces will introduce the potential for miscommunication. All while the UK supply chain is dealing with scaling up its capacity and capability to meet the increasing demand for manufacturing services.

Which, of course, may be a good problem to have for the UK manufacturing supply chain. However, it may prompt offshore wind developers to look closely at the value of their subsidies versus a less certain cost at delivery the projects ROI and their reputations for successful development projects.

If a developer chooses to maintain the status quo with their current suppliers, they risk losing pricing subsidies. Some may consider this lost revenue a necessary trade-off to maintain a semblance of certainty with their suppliers. If they do switch to UK suppliers, they may need to start hedging against the uncertainty. Either way, for those who have become used to secure reputations and predictable returns on their investment, this is worrying indeed.

The UK government’s regulatory changes look set to cause more than a mere storm in a teacup. Faced with all this, offshore wind industry leaders will need to move quickly from their current optimism. We know that firms have to appear bullish in their assessments of project delivery, especially when dealing with such long timelines. But, on the project itself, we would encourage a serious pragmatic pessimistic outlook.

How can we help?

Whether you are directly involved in offshore wind, you want greater certainty of your project risks. To develop more accurate forecasts and better weigh your risk landscape, you need to understand the new environment, its context and which way the wind is blowing.

You can start by using our free online assessment tool to see where your project stands.

For more on our services: