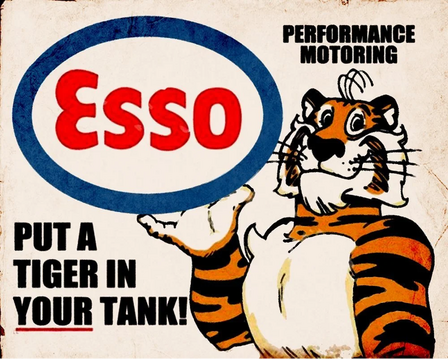 Lions and tigers…and shares, oh my!

Project resilience beats corporate robustness every time. But how to get the performance you need without paying for capability you won’t use?

This Esso ad, which ran from the late 1950s to the oil crisis in the early ’70s, implied a significant performance improvement by injecting the right fuel—something all teams on large complex projects surely desire. Late changes, unplanned events and unforeseen situations conspire to derail large complex projects. Although many may feel they only happen to other people’s projects, these aren’t rare occurrences.

A few years ago, we were hired for a modification and repair project in Singapore, in which the project execution team had been hit with a massive increase in scope almost immediately upon arriving on site. The increase was caused by the late identification of scope that couldn’t have been foreseen. Another time, in Dubai, an apparently small and straightforward job became less so when the client team’s corporate decision-makers took the opportunity to do much more ‘while they were at it’. The team suddenly faced a much larger and more complex challenge, completely beyond the initial design for the project’s organization.

In both cases, the corporate and project structure of the organizations were blind to the impacts their changes caused, surmising instead that with people now in place the team could handle anything that cropped up. Both teams embraced the challenge and attempted to absorb and deal with the impacts themselves. They couldn’t. No one could, and both these projects suffered long delays and large cost overruns as a result.

Teams typically plan projects based on what’s known. But not everything can be known prior to cracking on with the job. In our experience, little consideration is given to organizing for events beyond known risks, even though everyone knows that changes, events and situations will start to happen almost as soon as the project’s been greenlit.

When it comes to decision-making, corporate project governance systems tend to be hierarchical, focusing on strength and rigidity to ensure consistency and compliance. While there’s certainly a place for following the ‘rules’, project organisations need the ability to flex to changing circumstances. Moreover, the events they encounter require swift intervention to get the project back on track, suggesting the need for ad hoc access to specialists who can rapidly respond and assist to all manner of surprises.

Scenario planning helps identify potential requirements. But few organisations have enough slack within their own operations to guarantee support when needed. Even if they did, most managers are loath to redeploy or refocus their own people at short notice, especially to a different cost centre for an unspecified duration. The value of bringing in an independent team is also clear when you’re trying to resolve situations, especially those that impact other stakeholders.

There is, however, a proven approach. In the excellent book Project Resilience, authors Elmar Kutsch and Mark Hall describe Erwin Rommel’s successful ‘Blitzkrieg’ strategy during the early part of World War Two that enabled the German Army to make huge territory gains with small forces. They use the term ‘Tiger teams’ for ‘ad hoc groups of subject matter experts coming together to deal with routine, everyday, problem-solving (and also crises)’. This approach, they write, is today used by Intel.

It’s a cost-effective way of getting the right expertise to resolve and recover situations. We’ve long provided such an approach to many upstream energy clients through our Peer Assist service and network of project specialists.

Making provision in your plan for Peer Assist, and keeping us on speed dial, equips your team with performance-bolstering flexibility when they need it most. Such assistance can prevent your project’s engine from overheating and enable your project organisation to operate as a well-oiled machine, safely within your project’s failure boundaries, despite any bumps in the road. Are we stretching the metaphor too far? Maybe.

But according to the UK’s ad journal, Campaign, Esso’s tiger was a winner, with Time magazine even declaring 1964 to be ‘the Year of the Tiger’. We weren’t around back then, but we are long enough in the tooth to know that if you’re undertaking large, complex projects it surely pays to put a tiger [team] in your plans. So, if you want to secure your reputation—and your company’s share price—give us a call.