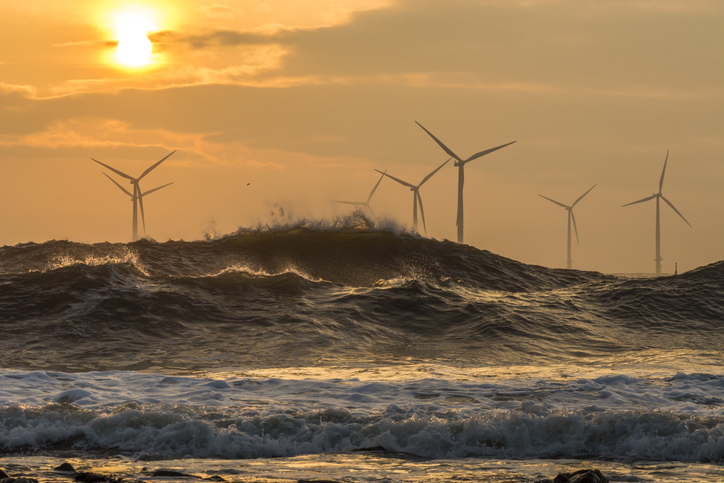 In the early days of offshore drilling and field development, major oil and gas companies owned and operated the rigs. Today, that’s the role of offshore drilling contractors. Will we see a similar division of operations and risk in Offshore Wind? We think it’s both likely and desirable.

We first got involved in offshore-wind energy projects back in 2010. The Sheringham Shoal Offshore Wind Farm, off the Norfolk coast, had been approved in 2008 and would become operational in late 2011. But first, the executives in charge called us in to discuss two pressing issues.

The first risk concerned succession planning. Some contracts included elements of operations management but had been signed with little consideration for knowledge transfer if operators changed after the contract expired. The second risk, and more immediate threat, was that the UK regulator had decided that a windfarm owner could not also be the owner of the transmission lines bringing the power to shore. At the time, the situation was resolved by selling ownership of the transmission line to a company called Blue Transmission.

I want to break free

When assessing a project’s risks, many companies focus on the threats. But risks also point to opportunities. After all, the whole idea of doing a project is to turn an idea into an advantageous future reality. By its nature, a project is uncertain and therefore risky. In this case, both vulnerabilities presented opportunities for others to get involved and change the operational landscape of offshore-wind energy.

We always wondered if another solution—one associated with the turbines rather than the transmission lines—might have been possible. Now it looks like it is.

Sheringham Shoal Offshore Wind Farm came to mind a few weeks ago when we wrote a piece inspired by the ever-increasing size of wind turbines. We posed a question: ‘As the scale of this piece of engineering increases, should the owner see the whole windfarm as “the project”? Or does each turbine – from manufacture to installation – become its own project, like delivering a single A380?’

As if on cue, Equinor, which operates Sheringham Shoal, has now unveiled designs for a Gigawatt-size floating offshore turbine hull. This may once again change the operational landscape of offshore-wind energy.

Traditionally, such large builds would require, among other things, large drydocks and heavy-lift capacity cranes. But Equinor’s turbine, dubbed the ‘Wind Semi’, uses a passive ballast system and a flat plate design which both reduce maintenance and provide a draught of less than 10m. According to Equinor, this will allow it to be assembled at most [UK] industrial ports.

A kind of magic

Smaller component parts can be manufactured anywhere, then assembled at a suitable port in a repeatable production-line style. The assembly port would require a large amount of real estate to successfully stitch it together and launch it. And the transportation network needed to link manufacturers and assembly sites certainly adds complication. But, by applying its stated aim of enabling industrial standardization, Equinor is setting the stage for a modularized approach to this kind of marine construction project.

This is good news and an excellent example of engineering reducing some of the complexity in large offshore-wind energy projects. And, given the complexity of each Wind Semi, from manufacture to installation, it seems such turbines should be viewed as ‘the project’ in a similar way to an Airbus A380 or, for that matter, an offshore drilling rig. Just as many rigs have become standardized as Mobile Offshore Drilling Units (MODU), these new turbine platforms become ‘Mobile Offshore Turbine Units’ (MOTU).

Equinor has form on this kind of design development. We first became involved with their designs on the ‘Cat D’ semisubmersible drilling rig concept, billed as a replacement for an aging North Sea drilling rig fleet. Those four units are now owned by the offshore-drilling contractor, Transocean, under a long-term charter from Equinor. A design change like the Wind Semi creates opportunities not only for efficient modularized manufacture during construction, but also for the value chain of offshore windfarm operations.

For instance, imagine an industry model where giant floating turbines are built, owned, and maintained by turbine contracting companies (essentially ‘wind contractors’) and ‘chartered’ by energy companies for the commercial life of their field licenses. This is analogous to how Floating Production, Storage and Offloading (FPSO) vessels are deployed on producing oil and gas fields today.

The capital costs and risks associated with owning and developing offshore-wind energy licenses can be reduced and shared. Moreover, the time to energy production is accelerated and final decommissioning costs reduced. And, unlike with Sheringham Shoal, the energy company developer can retain ownership of the important transmission aspects of the farm while not having to worry (so much) about the wind turbines, which are merely temporarily moored windcatchers and converters, to be changed out or replaced as needed or as technology improves. When licences last 50 years, the benefits of this become apparent.

As the offshore oil and gas industry model matured so did the mix of supply services, to the wider benefit of all involved in the industry and those who would become involved later. For pioneering companies looking for an innovative space to grow, the message seems to be ‘get on your bikes and ride’. If you’re looking for advice on the risks and rewards of doing so, give us a call.